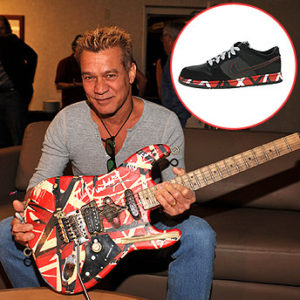 Guitar Player, July 1984.Rock and roll is feeling. And after you know most of the basics”chords, rhythms,
scales, and bends, which I’ll begin discussing in a minute”getting that feeling is just
about the most important aspect of playing guitar.
In my opinion, you can’t learn to play rock and roll by taking lessons. Although a
teacher can show you certain things, such as songs and licks, you still have to sit down
and learn how things feel by listening. My biggest influence was Eric Clapton when he
was with Cream and John Mayall’s Bluesbreakers. I learned his solos to “Crossroads”
[from Cream’s Wheels Of Fire, RSO, 3802] and “Sitting On Top Of The World” [Cream,
Goodbye, RSO, 3013] note-for-note by slowing them down to 16 RPM on my dad’s
turntable. By taking licks off records and listening, I developed a feel for rock and roll. If
you want to play, that’s the same kind of thing you’ll have to do. Eventually, you’ll take the
phrases and rhythm patterns you’ve copped and begin to put your own mark on them.
One of the areas that guys put too much emphasis on is equipment. Once when Van
Halen was on tour, we were opening for Ted Nugent and he was standing there watching
me play, wondering how I did it. The next day at the soundcheck when I wasn’t there, he
asked our roadie if he could plug into my stuff. Of course, it still sounded like Ted. In other
words, it doesn’t really matter what you’re playing through. Too many guys think a certain
player’s sound has to do with equipment, but it doesn’t make any difference. Your sound
is in your fingers and brain.
If you’re going to learn to play lead, get an electric guitar. It doesn’t have to be an expensive one (I started on a cheapie Teisco Del Rey). Acoustic guitars aren’t good for learning lead, because you can’t play up very high on the neck and they take heavier-gauge strings, which makes it hard to bend notes. (I use light ones, Fender XLs.) Also,you don’t really need an amp at first, unless you’re in a band. When I’m noodling around the house, I rarely plug in.
Most beginners want to learn lead because they think it’s cool. Consequently, they
never really develop good rhythm skills. Since most of a rock guitarist’s time is spent
playing rhythm, it’s important to learn to do it well. Learning lead should come after you
can play solid backup and have the sound of the chords in your head.
Playing blues progressions is the best place to start learning, because they’re so
basic, and they form the foundation for a lot of rock tunes. After you’ve got one or two
patterns down in a couple of keys, you can start noodling with lead guitar. Examples 7
and 8 are two shuffle patterns in the keys of A and E, respectively. Memorize them as
soon as possible. Eventually, you’ll want to learn them in some of the other common rock
keys, such as C, D, and G. “Ice Cream Man,” from our first album, and “Blues Breaker,”
which I did on Brian May’s Star Fleet Project, are 12-bar blues. [Ed. Note: In the tablature,
the horizontal lines represent the guitar’s strings (the uppermost line is the first string),
while the numbers denote frets.] 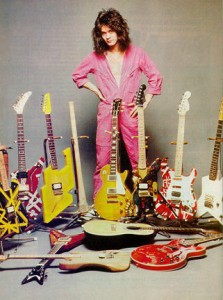